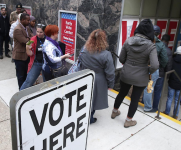 Ruling is a victory for voters

September 11, 2020- In denying a temporary injunction in State of Texas v. Chris Hollins, a district judge has ruled that the State of Texas may not prevent the Harris County Clerk from sending election materials and resources, including ballot-by-mail applications, to the county’s registered voters. The court specifically rejected Texas’s arguments that the planned mailing exceeded the County Clerk’s authority under the Texas Elections Code.

“This is a victory for Texas voters against a blatant attempt at voter suppression,” said Gary Bledsoe, president of the Texas NAACP. “Make no mistake: If the Texas Attorney General were allowed to block the clerk’s plan, people would be forced to go to the polls who may have had an option to stay away. The more people who vote in person, the greater the risk of contracting the virus, and so voters would have to choose between their vote and their health.”

The Texas State Conference of the National Association for the Advancement of Colored People (the NAACP) and the Anti-Defamation League’s (ADL’s) Southwest Region, represented by the Brennan Center for Justice at NYU Law and Dechert LLP, submitted a brief in support of Harris County on September 8th.

By sending ballot-by-mail applications to all registered voters, Harris County will provide easier access to a safe method of voting for high-risk populations for COVID-19. The county’s planned mailing would also benefit voters by encouraging those who are eligible for mail ballots to submit their applications early, reducing the likelihood of surges in applications that could slow down processing, and by providing accurate information and guidance to voters about the changes in voting necessitated by the pandemic.

“The Clerk’s plan is a commonsense approach to serving the diverse Harris County electorate during these challenging times,” said ADL Southwest Regional Director Mark B. Toubin. “Texans need all of our election officials to be working hard to ensure that no eligible Texan is disenfranchised.”

After claiming that the planned mailing would promote fraud and sow confusion, the Texas Attorney General failed to introduce evidence regarding fraud to the court, nor did the state establish that the clerk’s plan would confuse voters. To the contrary, the mailing will reduce confusion by including voter education materials explaining who is eligible to vote by mail.

“The Texas Attorney General should be ridding the state of voter suppression, not spreading debunked myths about voter fraud,” said Myrna Perez, director of the Voting Rights and Elections Program at Brennan Center for Justice at NYU Law. “In tough times, Texas voters need their politicians to be on our side.”

“We are committed to ensuring that all eligible voters are able to exercise their right to vote, to do so safely, and to have confidence that their vote is counted. Having accurate information concerning eligibility to vote with a mail-in ballot and ready access to a mail-in ballot application is a critical part of voters’ exercising their fundamental right to vote. This ruling preserves voters’ rights.” said Diane Siegel Danoff, a partner at Dechert LLP.

Harris County, which has 2.4 million registered voters, is one of the largest voting jurisdictions in the United States and one of the nation’s most racially diverse counties.

ADL is a leading anti-hate organization. Founded in 1913 in response to an escalating climate of antisemitism and bigotry, its timeless mission is to protect the Jewish people and to secure justice and fair treatment for all. Today, ADL continues to fight all forms of hate with the same vigor and passion. ADL is the first call when acts of antisemitism occur. A global leader in exposing extremism, delivering anti-bias education and fighting hate online, ADL’s ultimate goal is a world in which no group or individual suffers from bias, discrimination or hate. As a 501(c)(3) nonprofit organization, ADL takes no position on behalf of or in opposition to any candidate for office. More at www.adl.org.

Founded in 1909 in response to the ongoing violence against Black people around the country, the NAACP (National Association for the Advancement of Colored People) is the largest and most pre-eminent civil rights organization in the nation. We have over 2,200 units and branches across the nation, along with well over 2M activists. Our mission is to secure the political, educational, social, and economic equality of rights in order to eliminate race-based discrimination and ensure the health and well-being of all persons. More at www.naacp.org.

Dechert is a leading global law firm with 26 offices around the world. We advise on matters and transactions of the greatest complexity, bringing energy, creativity and efficient management of legal issues to deliver commercial and practical advice for clients. Please visit www.dechert.com for more information.