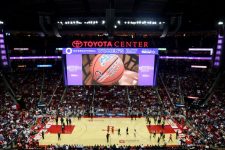 The panel was moderated by Yvonne Harris, Diversity & Inclusion Brand Leader on the Corporate Social Responsibility (CSR) team for Capgemini North America, whose clever questions, sometimes with a basketball theme, led the panelists to answer with meaningful and inspiring stories taken from their own lives and experiences.

All six of the women on the panel encouraged the young people in the audience to believe in themselves, to know who they are, and to avoid letting others forge their path or dash their dreams.  One of the first things Swoopes said to the girls in the audience was “Understand your worth.  Understand who you are and be confident in that.”

Moderator Harris got a variety of answers when she asked panelists to do an instant replay of something in their lives they would do differently.  Elliott talked about being ready for any eventuality, and said one of her mentors, Anna Wintour told her “everyone should get fired once in their life.”  Elliot told the crowd, “it teaches you to prepare.”

Elliot and several other panelists spent formative years in Manhattan, and Houston told attendees when she was just starting out in New York, she wished she had reached out to others for help.  “I would have sought out a network of like-minded women,” she said.

The other panelists continued with their own inspiring messages. Johnston encouraged the young people in the audience to know themselves and speak out when necessary.  “There were moments when I let other people dim my voice,” she said, “Having confidence and portraying it is the best thing you can do. Kindred told the audience when they see injustice, “it’s really important to communicate to others who can help you make a change,” and D’Antoni agreed.  “All of us have to do a better job,” she said, of standing up for others and speaking out against hate.  “We all have skin in the game.  You have to call it out.  If you’re silent, you’re complicit.  It’s up to you.”

After the Summit, which took place in the Toyota Center’s Sky Bistro, participants adjourned to the basketball game.  Several of the panelists from last year and this year were recognized on the court for their leadership in promoting equality and empowerment for women.

ADL thanks its partner, the Houston Rockets, and its generous sponsors CapGemini, Merrill Lynch, Morgan Stanley, Talent Path and Walmart for a great event.