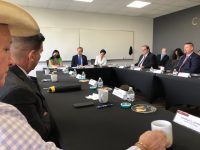 ADL Southwest Region International Affairs Committee Vice Chair Joel Gluskin and Senior Associate Director Dena Marks attended a meeting August 26. 2022 with Mexico’s Ambassador to the U.S., Esteban Moctezuma Barragan at Houston’s Mexican Consulate. Gluskin and Marks joined more than 30 representatives of area law enforcement, medical and social service agencies at the meeting, which was called by Houston Consul General Alicia Kerber Palma.
The meeting began with introductions around the room, and the representatives of every agency attending spoke of the long and meaningful relationship their agency enjoyed with the Consulate. Marks spoke of ADL’s two Memoranda of Understanding with the Mexican Government, how ADL has provided hate crimes and anti-bullying training to the Consulate, how the two entities have worked together on the “Denuncia El Odio” campaign which encourages people to report hate crimes and hate incidents to the Consulate and ADL, and of recent work together, including a video shared on social media featuring Southwest Regional Director Mark Toubin and Consul General Kerber addressing what people should do if they witness hate because of misinformation about Monkey Pox.
Both Ambassador Moctezuma and Consul General Kerber mentioned their government’s deep relationship with ADL and shared their appreciation for that partnership. The Ambassador said the ADL Hate Crimes Training was “like a milestone for us.” The Ambassador also spoke more broadly of the importance of the relationship between the U.S. and Mexico. “I don’t think there are two nations of the world that share a more important border or relationship,” he said.
He highlighted several initiatives his government was working on with the United States, including the reduction of arms trafficking to Mexico. “80 percent of the crimes committed in Mexico are with arms from the U.S.,” he said.
Ambassador Moctezuma mentioned that U.S. Secretary of State Antony Blinken would be in Monterrey, Mexico on September 12 for a high-level economic dialogue, and he said he wanted to let people know what the U.S. meant to Mexico. “We’re partners. We’re friends. We want to become allies. We see a future of respect, better living for all, and we want to teach the world that countries can have a different past, but can look toward a shared future.”
Posted in Combating Hate.